I’ve struggled a bit this last week. Since the restrictions began, I’ve done my damnedest to stay positive. I’ve told myself I’ll stay healthy, that the Irish Board will survive, that the pandemic will be over sometime, that working from home will be interesting, that I have lots of creative things to do and that the lockdown will give me more time to do them, and that everything will be fine.

And, you know, I’m still pretty healthy, and I’m fitter from my early morning 5K walks and my daily dose of Yoga with Adriene (with one n). Although the Irish Board’s income has dried up, we’ve worked hard to put in place alternative ways of doing exams and entries are starting to come in. The pandemic will end sometime. There’s no doubt of that, but the sometime might be a long way away. I have continued this creativityeveryday project and I’ve done some interesting (to me anyway) and original stuff.

Over this last week, though, I’ve felt increasingly frustrated and on edge. It could be a touch of cabin fever, although I do get out in the mornings and I’m not the most sociable of people anyway. It could be that the early lockdown peace and quiet is ebbing away with more and more cars on the road and the sense that people generally are not adhering strictly to the restrictions. It could be that I had a glimmer of hope that the disruption caused by this pandemic might result in a shift in attitude and lead to a different sort of society – one that is less reliant on competition, on people rushing around, on consumption, on the privatisation of the public sphere, on the ‘me’ as opposed to the ‘we’. And yet the prevailing discourse centres on getting back to ‘normal’, back to work, getting the economy moving, getting kids back to school, reopening all those places where people go to consume. Social media is dominated by people highlighting more things to consume, to distract, to keep you occupied. It’s as if everybody has lost the capacity to just be, to fall back on their own resources, to be quiet. It could be simply fear: of becoming infected, of losing people, of losing security, of losing certainty. Or it could be that a combination of all these things has seeped in to my consciousness and laid siege to the increasingly vulnerable positive citadel I had constructed for myself.

Well … whatever. I’m going to do my best not to let my defences be breached. Fuck it. I don’t actually have to go with everybody else’s flow. I can create my own flow.

So, what have I been up to?

Most people by now will be aware of the Getty Museum Challenge and other similar challenges whereby those staying at home to flatten the curve have been encouraged to recreate art works with everyday objects. Christine and I recreated Les Amants a week or so ago and she suggested La Mort de Marat as a possible solo effort. And so, responding to frequent prompts, I pulled my finger out, gathered the materials and did this …

Prompted then by the recent delivery of an order of essential oils in the post, I made some candles. For me, part of the joy of candle making is the gathering together of the different receptacles: painted tuna cans, espresso cups, jars, and so on. The process thereafter is simple enough but you do need to have everything to hand at the start or else the capacity to get in a muddle is pretty acute. I had thought of a scent: a carefully blended mix of geranium, orange and bergamot. In the end, as often happens, I discovered that I didn’t really have enough bergamot to make that work, so I bunged in some lemon and lavender that I had left over from a previous session. I was worried that I didn’t have enough scent for what the experts call the hot throw, and that the smell wouldn’t work. In the end, the scent throw is fine and they smell quite nice: citrusy with a flowery note. Get me with my flowery notes. 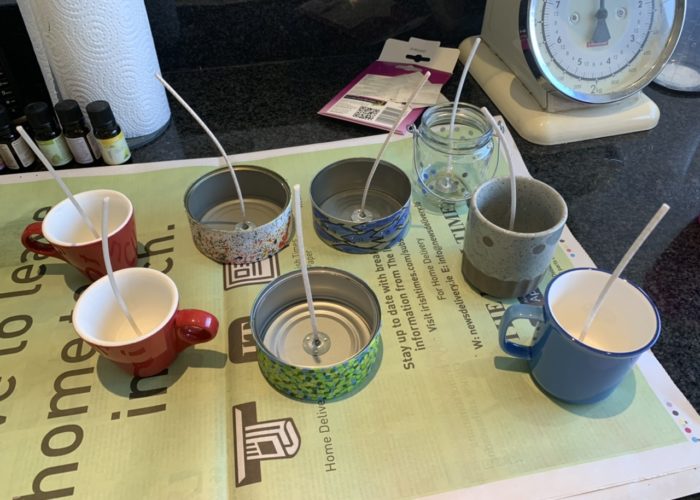 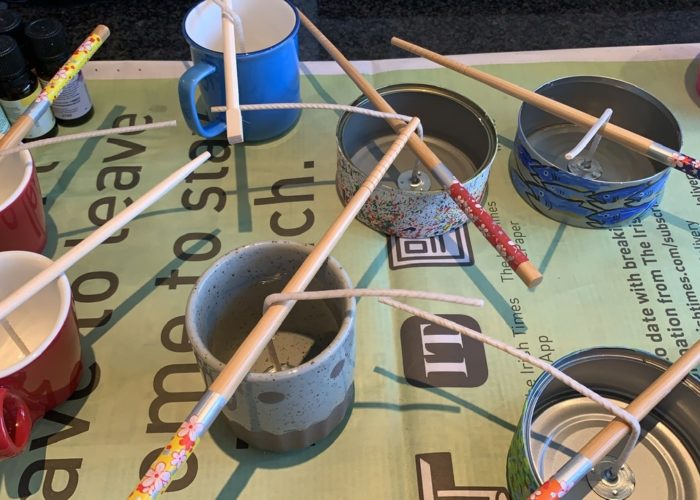 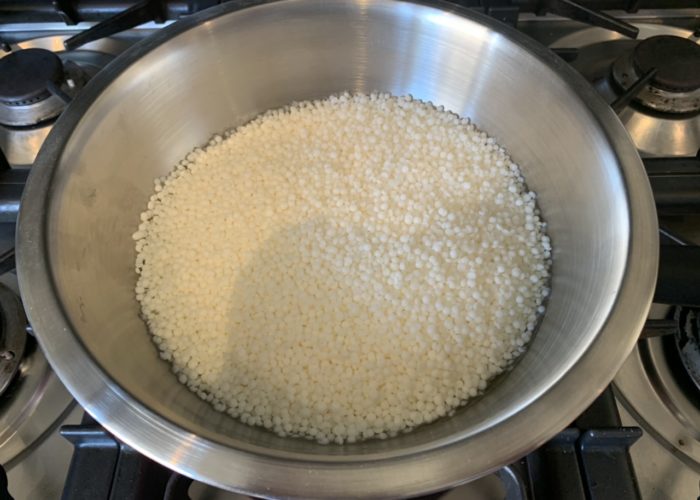 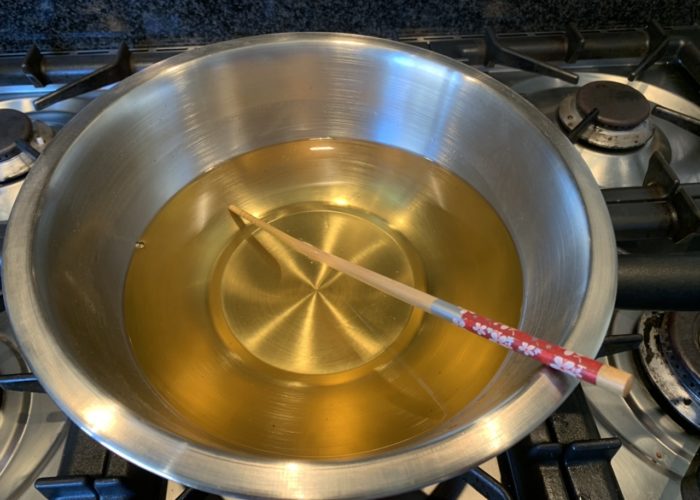 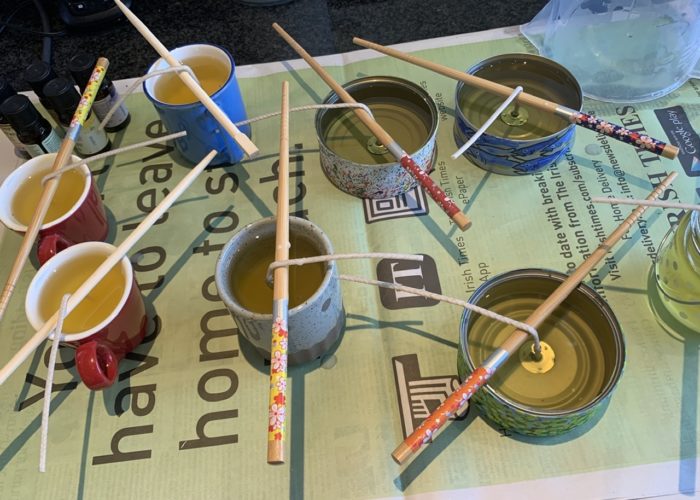 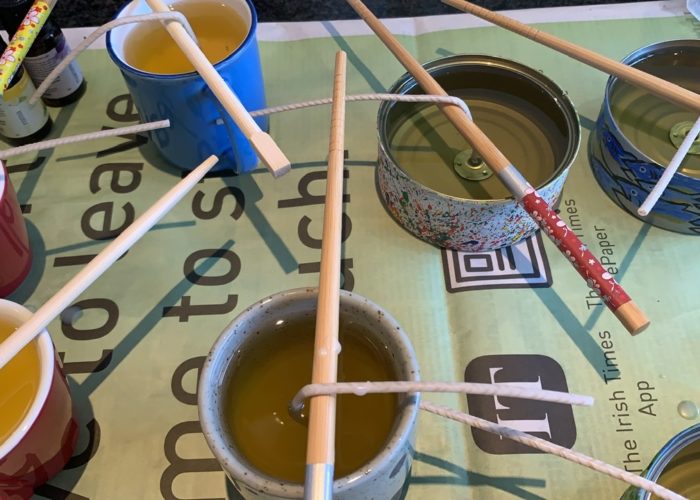 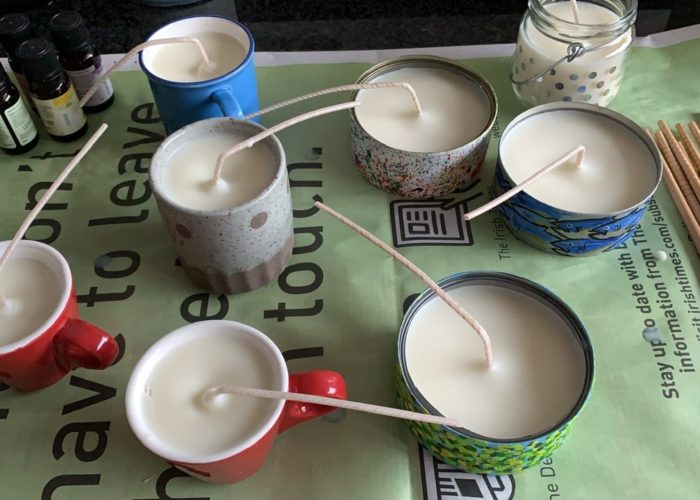 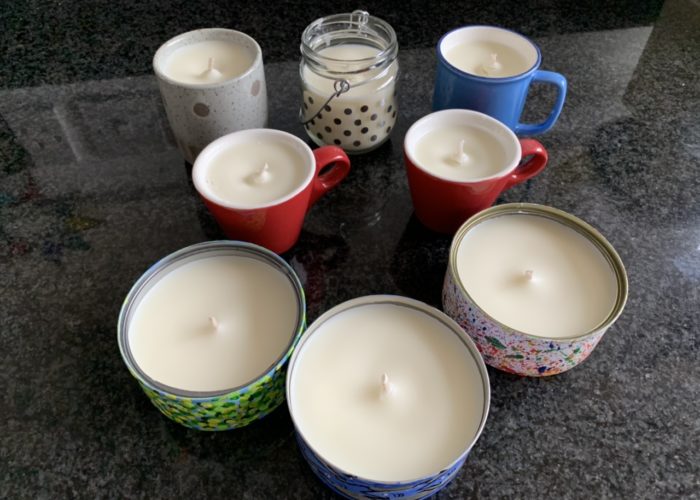 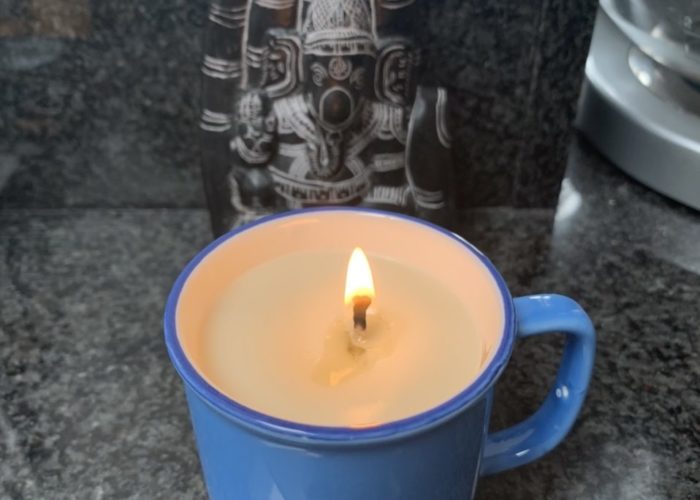 Will Seaman, who helped me out with a marmalade recipe in February, used Instagram to send me a recipe and encouragement to make rhubarb vodka. What’s that, I hear you ask. Well, it’s really, I suppose, rhubarb flavoured vodka. You pound a couple of stalks of rhubarb (thanks to Michael, our next door neighbour for the rhubarb) …

… macerate them with sugar for a couple of days …

… pop in some lemon zest, a few cloves and a cinnamon stick, and fill the jar with a litre of vodka.

Give it a shake every day for three weeks, strain and leave to mature for three months. Then imbibe liberally while attempting to remain vertical.

On one of my walks, I was conscious of the pandemic phenomenon of discarded latex gloves and it suggested an idea. The disembodied hand in a latex glove, posed. The challenge was to fill the glove(s) with a substance that allowed the flexibility to create poses but the rigidity to maintain a pose while a photograph was taken. Playdoh suggested itself and was suggested subsequently by Vicky but current restrictions prevent me from stealing from a child. Then I remembered that I had some airdough in the attic. Perfect, although only sufficient to do one glove so the entwined fingers holding hands image had to be dispensed with. The results are a bit rough and one might well legitimately ask why not use a real hand. The answer is, of course, because … art. 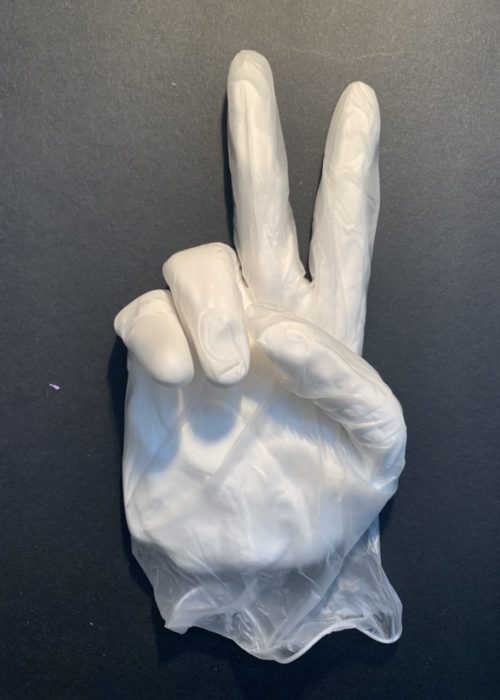 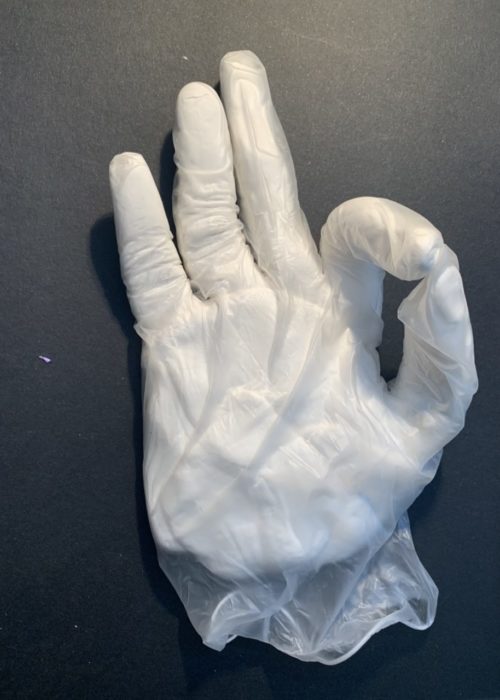 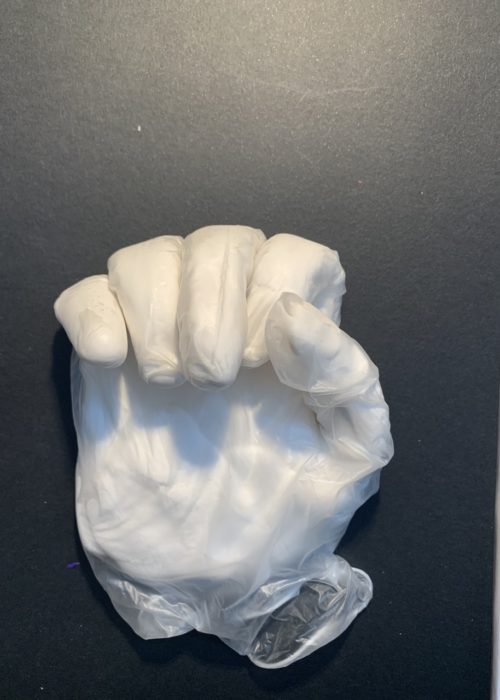 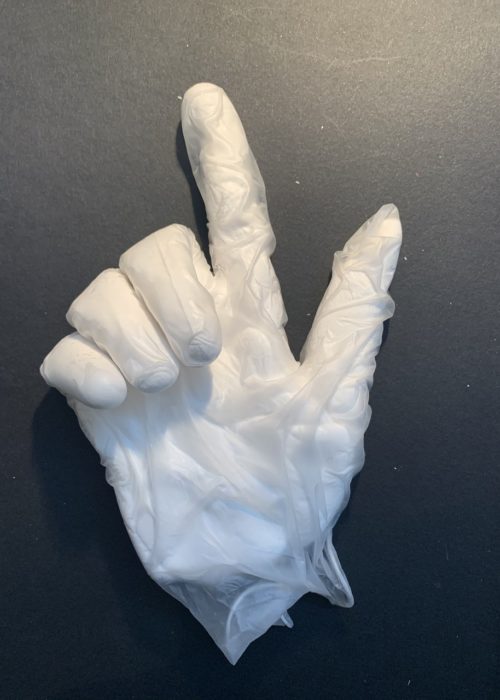 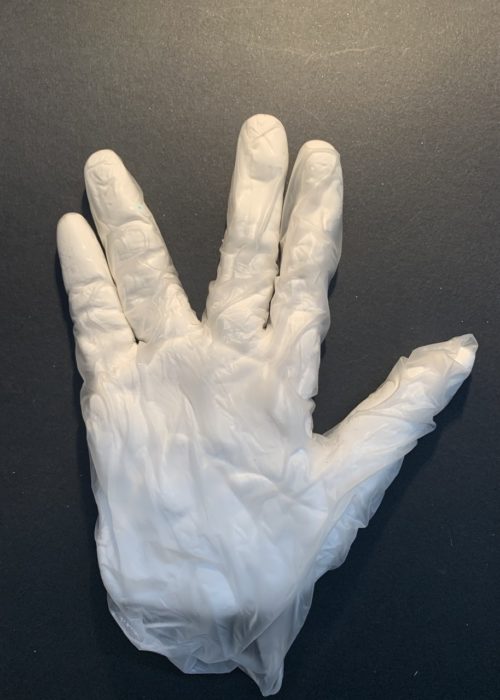 Last week I wrote about making a little book. Well, this is what it became …

Yesterday, frustrated with seeming to have lots of time and the impression that I really had little to show for the week (which actually, as this blog post has demonstrated, wasn’t true), I grabbed a Sostrene Grene impulse purchase, and a Lidl impulse purchase, and an old book of Celtic knot work, and I did this piece of pyrography. It’s a little rough at the narrow bit but, for a freehand drawing, and using the cheapest of pyrography pens, and not spending a lot of time on it because I was making dinner at the same time, I think it’s OK.

Finally, I’ve had a walking cane in our umbrella stand for donkey’s years. I knew it had an inscription on the handle and I knew also that it had a family connection but It’s a long time since I looked at it. So I polished it up and, lo and behold, it seems that it was given to one of my great-grandfathers (my paternal grandmother’s father, I think) in 1890. That’s 130 years ago. Yikes.

One thought on “A Citadel Under Siege”