Not that much to show you today. I have kept to my resolution but the things I’ve been working on are more about long term developments than quick wins.

The big news of the week was work-related: the launch of the Irish Board’s video-based exams The lion’s share of the credit for it must go to Vicky, my assistant in the Irish Board, but I did nod and smile at the right moments. We had been considering offering video-based drama exams for a while, even before the pandemic but the current Government restrictions put in place to reduce the numbers becoming infected by the coronavirus hastened its development. The context is that, because we can’t conduct drama or dance exams face-to-face, we need to consider other ways of examining. Vicky had seen an Irish dancing website where dancers enter competitions by submitting a video of themselves dancing. An adjudicator then looks at the submitted videos and marks the competitors on the basis of the videoed performance. It’s a simple idea, and we had considered that video-based exams might have an application for very small examination centres or for children who missed their own exams through illness or other commitments. Of course, now, it seems as if it’s the only way that we can conduct exams at all.

We launched our video-based exams on Tuesday and I there is no doubt that I have never had a more exciting morning in work than that one. It was a perfect storm of collaborative creativity as Vicky and I brought a number of documents, website amendments, broadcast emails and other items together to finalise the offering. At lunchtime it was ready to go and we held our breath as Vicky pressed ‘Send’ to release our Mailchimp email to teachers: the final piece of the jigsaw. I was shaking after it with all the adrenaline flowing through my veins. In normal times, we might have cracked open a bottle of champagne to celebrate. But these, unfortunately, are not normal times.

The reaction from teachers, so far, has been extremely positive and we’ve received four bookings already and loads of enquiries and compliments. We know the system works because we’ve tested it (with notable contributions from the young lad, Edward, and Christine for which I am very grateful) and it’s a much better and more manageable system than those promoted by other examining boards. So, while it won’t compensate entirely for the loss of exam centres due to the pandemic, it will help.

I had it in mind to create a little book. In my head I saw this as being made up of single sheets of Khadi paper (a rag paper produced in India), coloured with quite intense colours, on which I might put various illustrations. Colouring the paper was messy but fun. But the biggest poser was how to bind the pages together to create a book. I must have looked at hundreds of images of book bindings and I’m now a bit of an expert on double fan binding. But none of them allowed all the edges of the paper (all the edges of Khadi paper are rough) to be displayed. Last night (at last) in a blog post dedicated to making books with kids, I found exactly what I was looking for. It’s a binding based on securing the pages with a piece of wood and, in the post, a rubber band. I thought that maybe I could use ribbon rather than a rubber band to enhance the aesthetics, and I tried it out this morning. 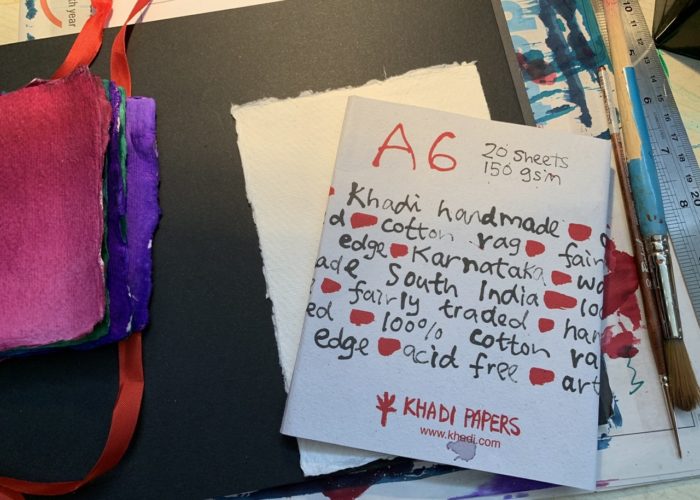 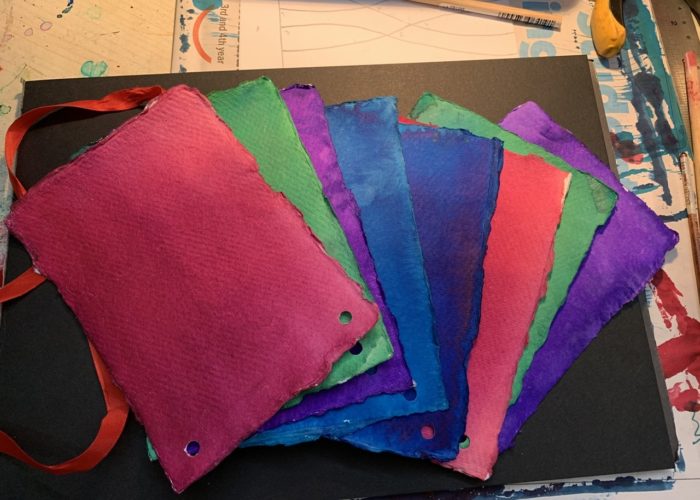 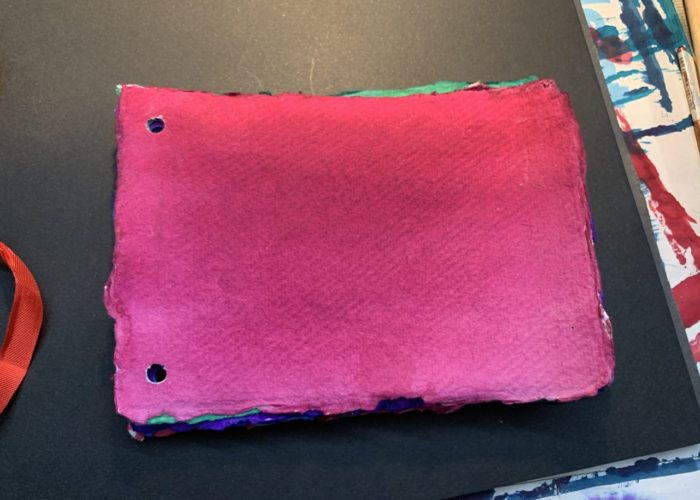 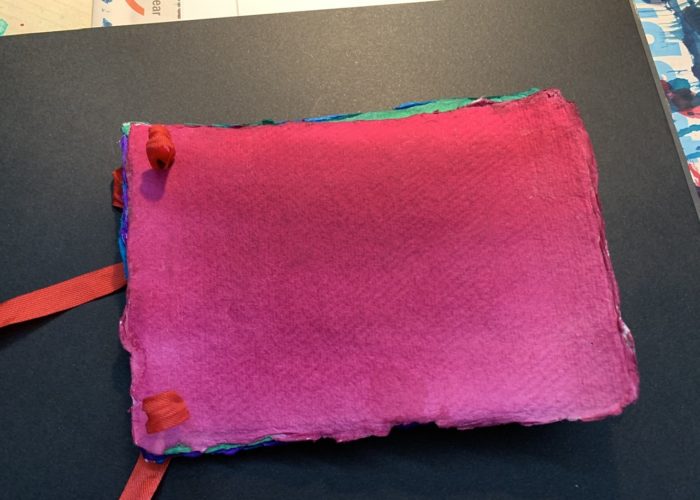 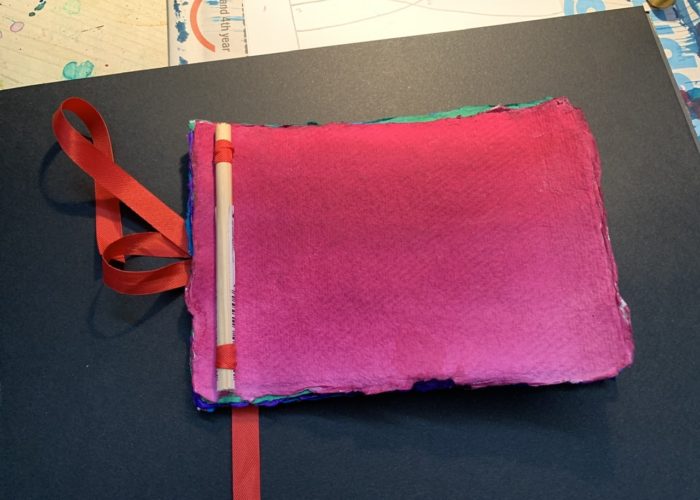 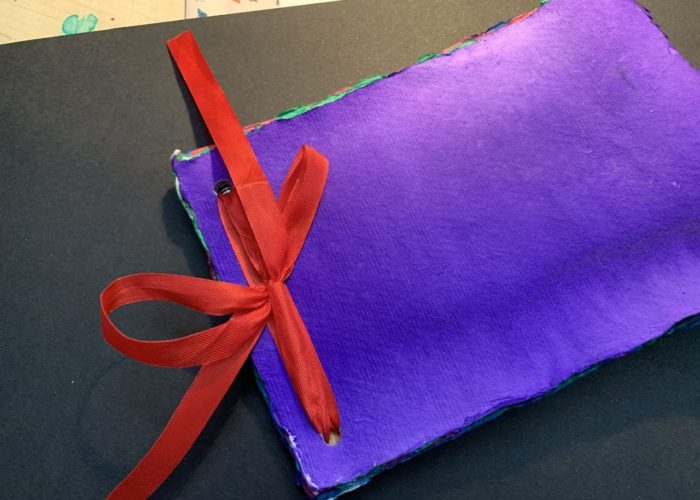 After my Hoover-related toe incident last weekend, I was quite nervous about putting on a sock and shoe and so I didn’t venture out of the house till Wednesday. On Wednesday, I took it very easy, walking around the block and calling into Supervalu for some supplies. Oh, and taking pictures of some very attractive clouds and of my shadow.

Then on Thursday, I resumed my early morning walks. Phew. I had missed them. I have this app on my phone that tracks you when walking. Its purpose is to report on distance and pace but it also tracks you on a map in real time. Some bloke I’m friends with on Facebook put up some pics of how he and his kids had used it to write their names in a park. Clever. I walked a heart just to try it out.

I was tired yesterday but (actually, probably, because) I was awake at 4.30am, thinking about this, amongst other things. Let’s call it mixed media. Wire on teabag. Whatever next.

Finally, it was sunny this evening, so I printed this cyanotype.

I love these. It’s like witchcraft (with all due respect to the real witches I know). This one has been in my mind for months and I finally got to do it today. It’s a contrived image that came about as follows. First, I found some pictures of individual jellyfish on Pinterest. I brought them into Photoshop, converted them to black and white and inverted them. Then (with the help of instructions found on the web), I created a composite picture of three jellyfish by creating three layers on a Photoshop canvas and importing an image to each. I was able then to position them and adjust their exposure to make the ones further away seem less opaque. I then printed the resulting picture onto an acetate sheet and used it to print the image onto chemically treated paper to create the cyanotype (or blueprint).

I did this, on a pebble with gouache. Better than last week’s eggs.

Oh, and I’m still trying to teach myself Travis-style fingerpicking on guitar.