By and large the weather has been fantastic. Until I had a small domestic accident on Saturday, I had been taking advantage of my tendency to wake early by going for lovely morning walks.

Other early morning walkers are a little more inclined to interact than the later ones. I’ve enjoyed the markedly fresher air, being able to hear birdsong (actually, that’s not quite true: I listen to music), watching the reflections on the river …

… and I’ve been gathering some images for possible cyanotype projects …

New life has been a bit of a theme for creativity over the last week. Last October I had an abortive attempt at making a Tree of Life. This time I saw it through.

I used coloured hemp and, although I thought the colours would flow into each other better, the result, although maybe a bit disjointed, is growing on me. The template/ instructions came from emilycouldmakethat.com. For the symbolism, see this link. 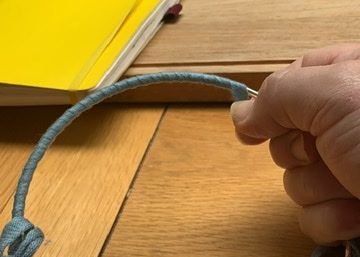 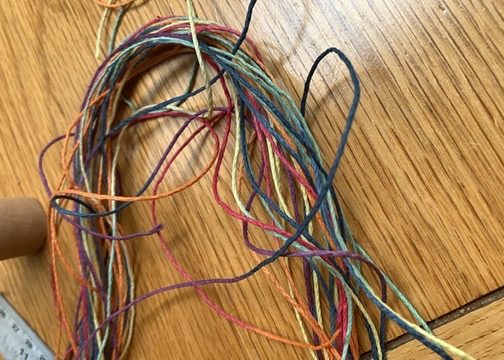 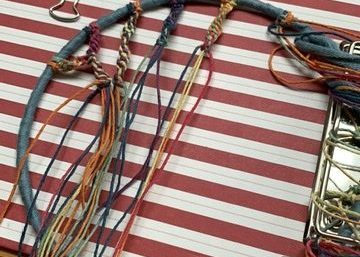 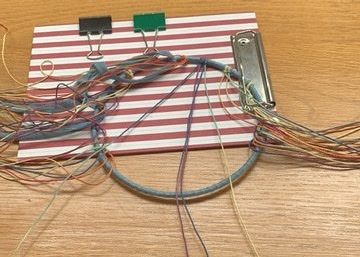 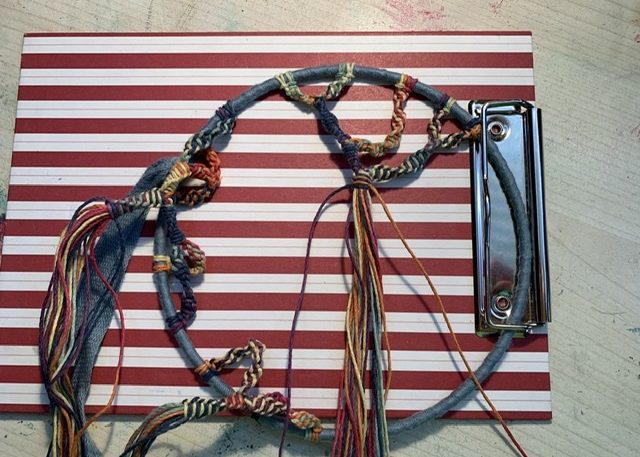 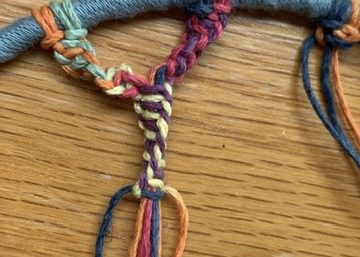 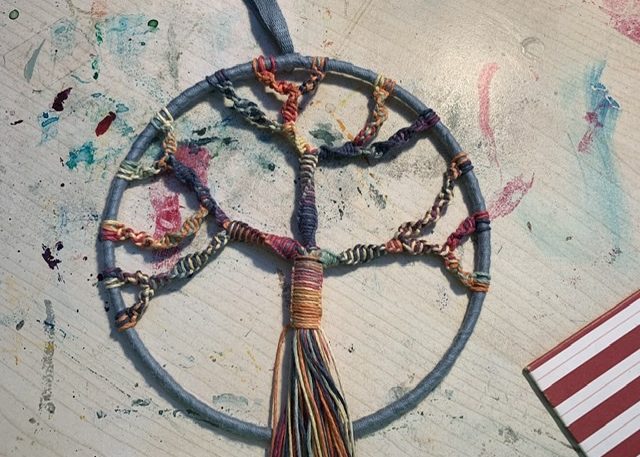 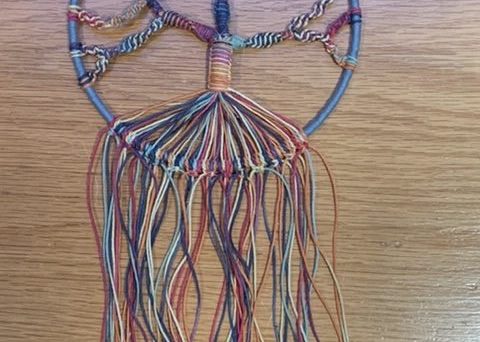 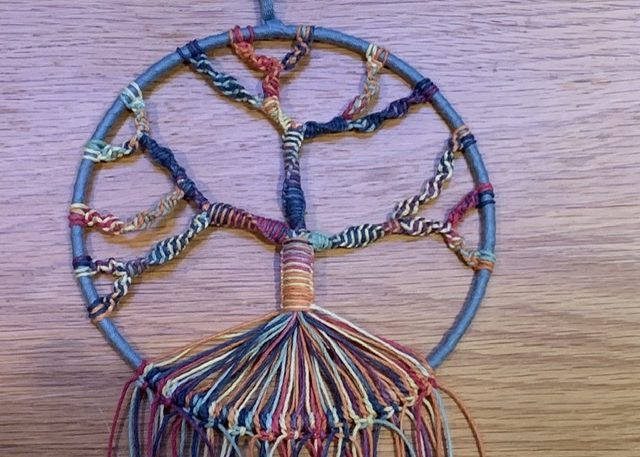 Then there were eggs. But first, an egg holder … 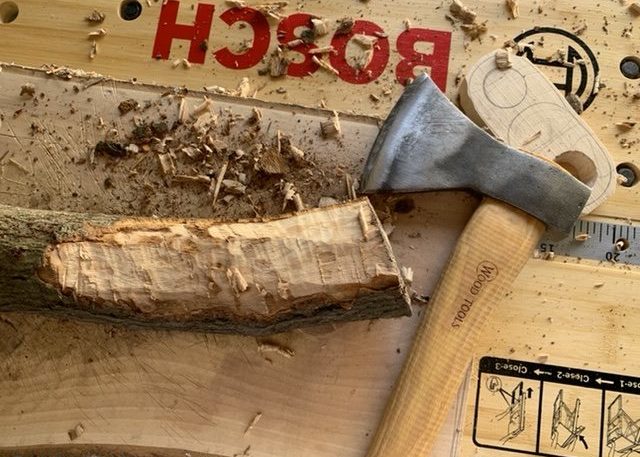 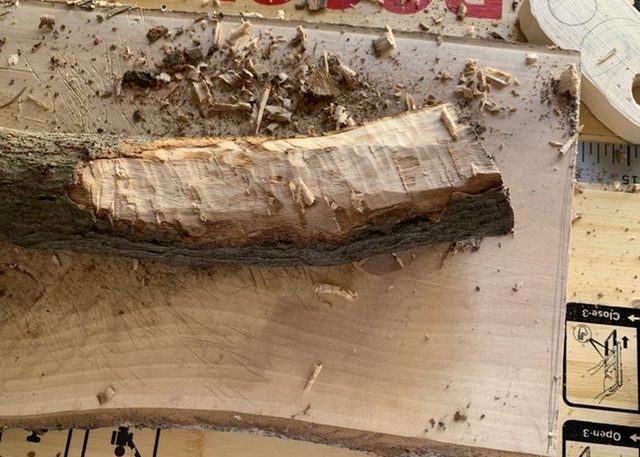 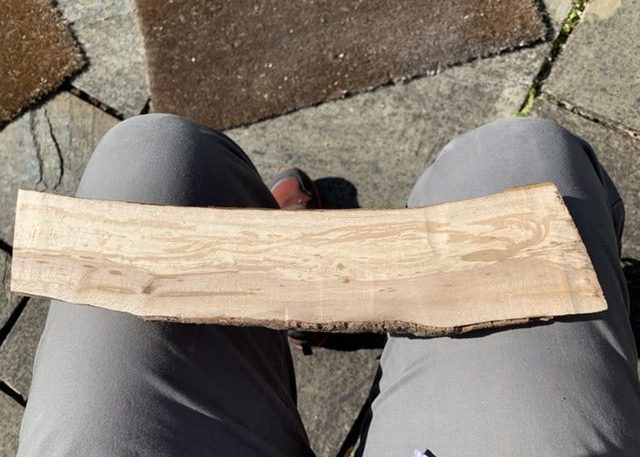 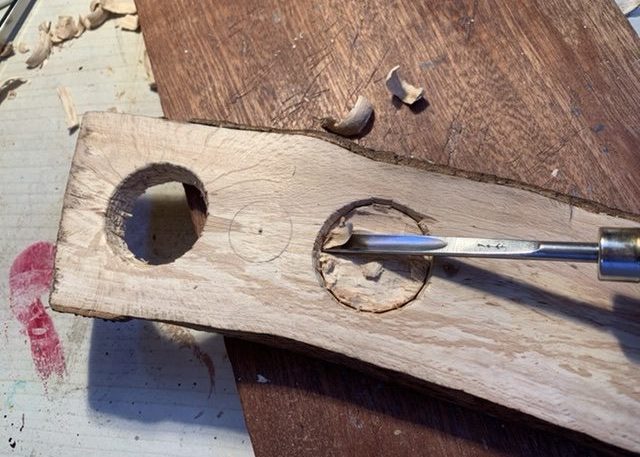 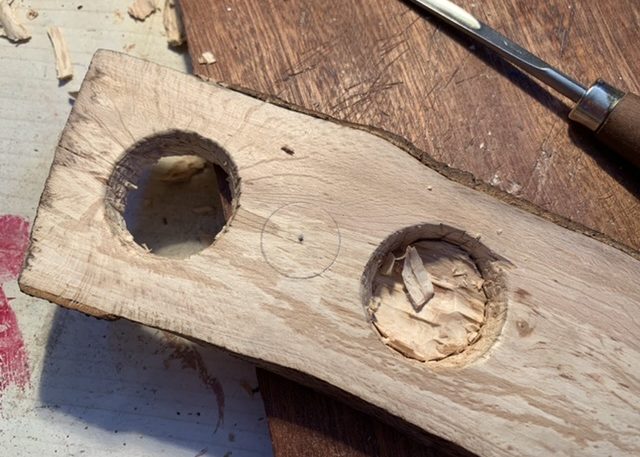 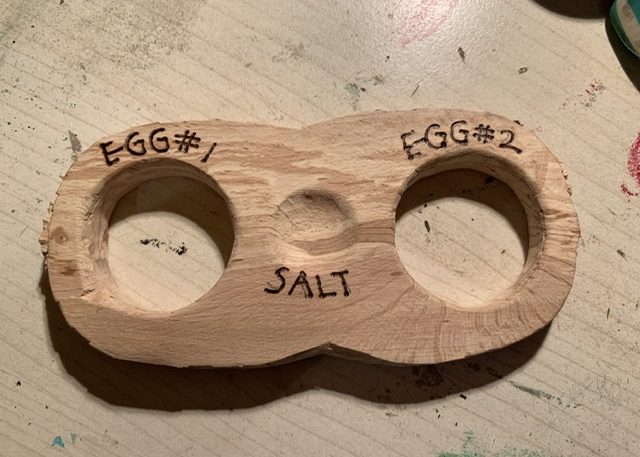 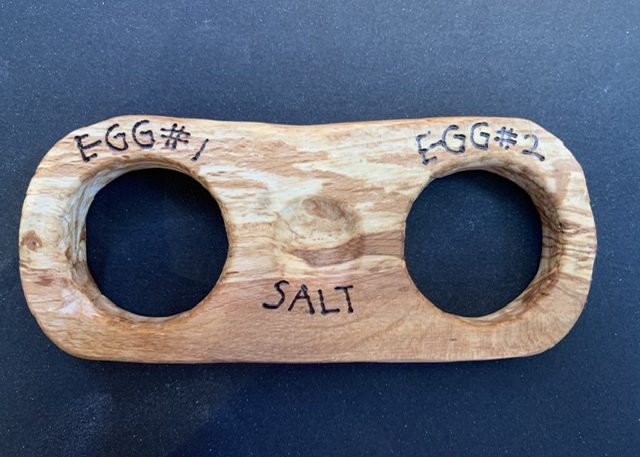 And some themed eggs, for the times we live in. A friend WhatsApp’d me a photo of a load of these so I thought I’d have a little go. We keep eggs in the fridge and the condensation resulted in the gouache staying wet for ages. My customary impatience got the better of me and so these are not as neat as I would have liked.

I had some culinary adventures too. About three years ago, I had the nicest Hot Cross Buns I’d ever tasted. They came from a local independent bakery, The Corner Bakery. They are always snapped up and I haven’t been able to buy them since. So I thought I’d make my own. I used a Paul Hollywood recipe from the BBC Good Food site and here they are … 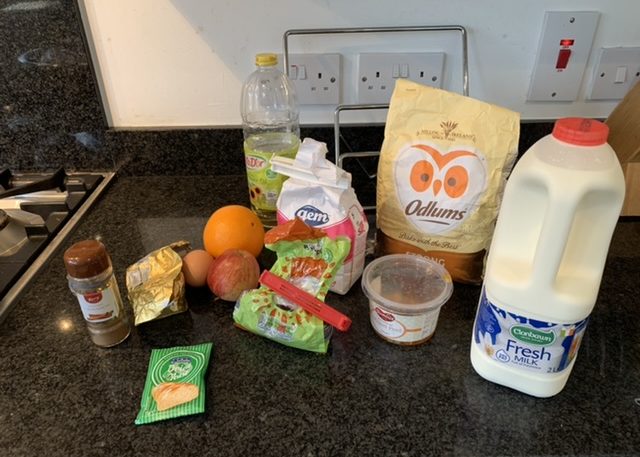 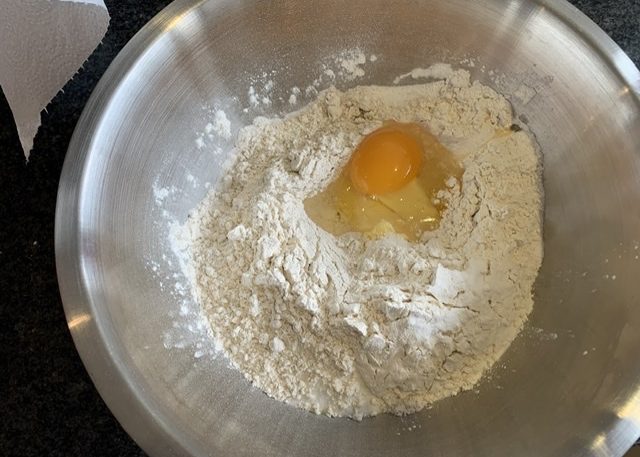 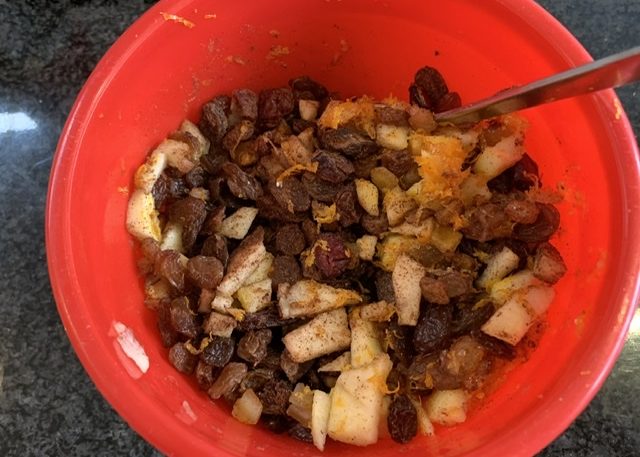 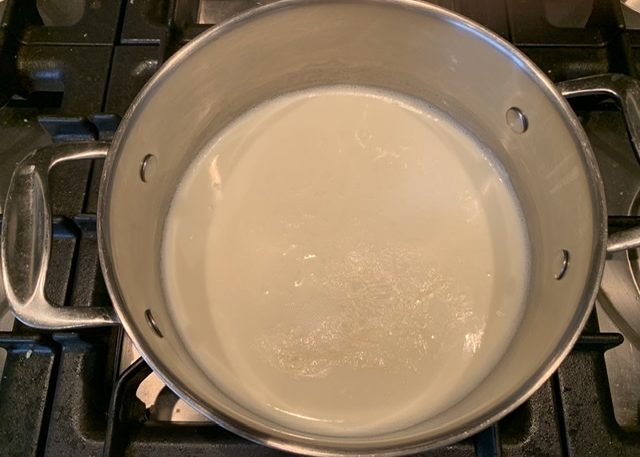 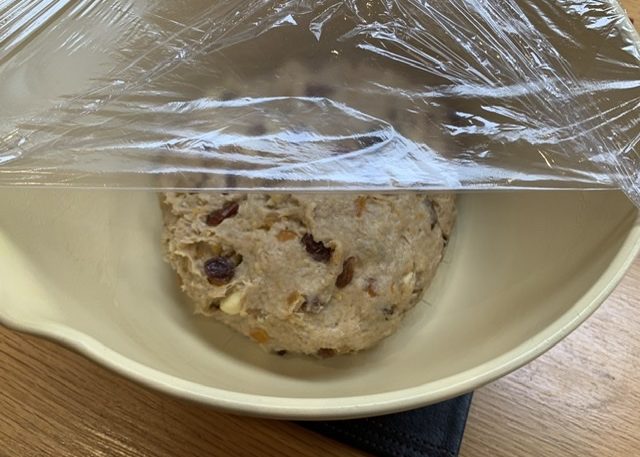 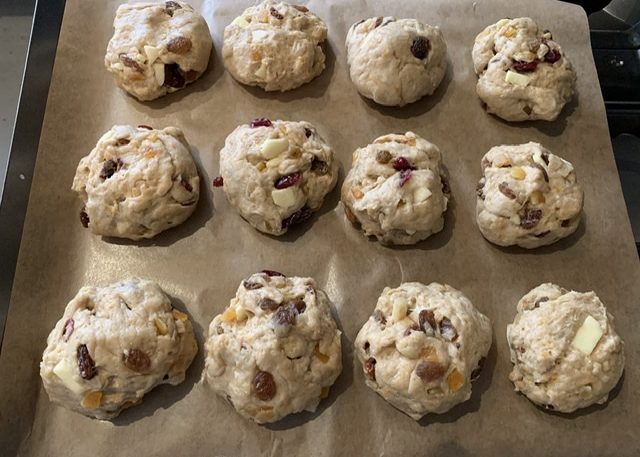 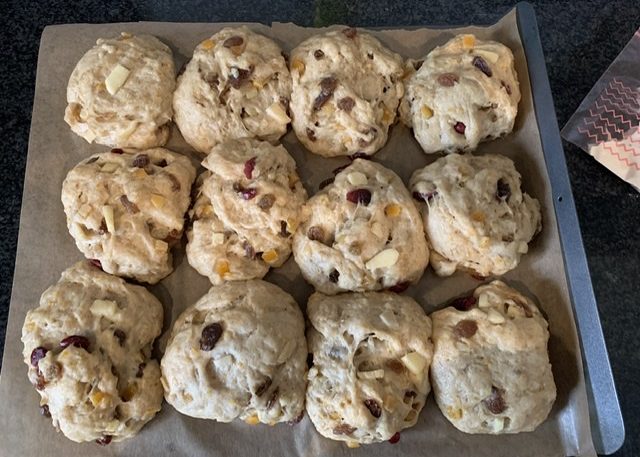 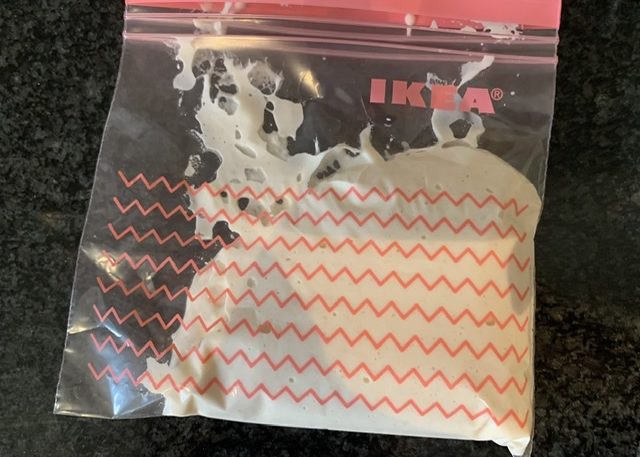 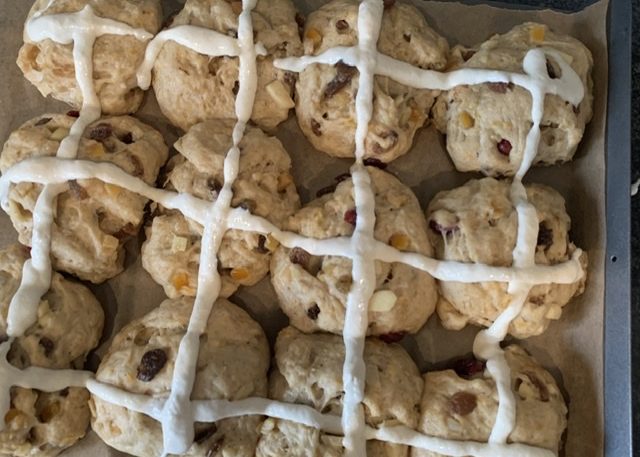 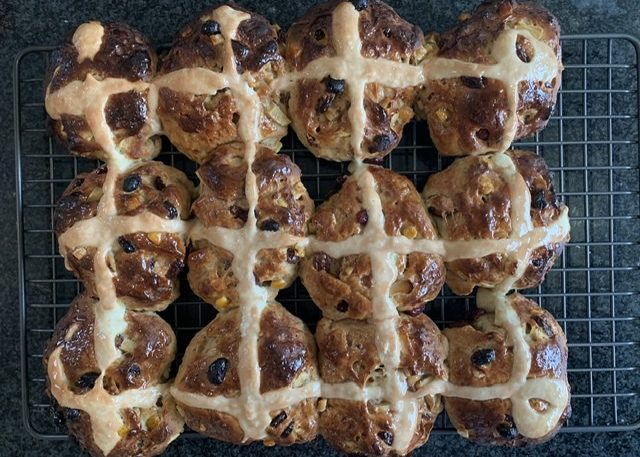 Christine is the star baker in this house (see her blog here) and I rarely make sweet things. There’s yeast in this recipe, and kneading, and proving, and a lot of waiting for things to get bigger. So the process takes hours. And then they bake in about 15 minutes. Can’t really get my head around all that. Anyway, slathered with butter, they were delicious.

Stretching the egg theme (hopefully you spotted the egg nestling in a bed of flour and sugar in the Hot Cross Bun slideshow), I made Baba Ganoush from a lonely aubergine (EGGplant) in the bottom of the fridge. I love this stuff.

Finally, and now I’ve exhausted the egg theme, I painted this mandala. I have often come out of Flying Tiger with something in my hand but no idea why I bought it. Some months ago I bought Puffy Paints. They come in little plastic containers with nozzles and are designed to be applied directly on to a surface from the container. The paint is effectively thick acrylic that dries with a raised profile. I had actually used some a while ago on a pebble but I’d forgotten that I had these rather bright colours. I thought they might look good on black paper, so I did this. The photo is filtered a bit to bring out the vibrance of the colour.

There were a few other bits and pieces but I think that’s quite enough for now.

I’ll leave you with this moving song by the legendary John Prine, one of the many victims of Covid-19.