As the coronavirus pandemic rages throughout the world, we’ve been told to stay at home, and only go out for necessities, to support vulnerable people or to exercise within a 2k radius from home. The point is to break the chain of infection. Meanwhile, large parts of the economy and society have been put in cold storage, employment being temporarily supported centrally by the State. How long this will last, nobody knows, although, in some form, it will last until a vaccine has been discovered, scaled up, and administered globally. Until then, slowing down of the rate of infection is a function of national initiatives to ‘flatten the curve’ to stop health services being overwhelmed, and the natural creation of a critical mass of the population who have achieved immunity by having survived a Covid-19 infection.

All I can say is that I’m glad I don’t have to entertain small children. For me, being confined is not a chore. A little frustrating at times but I’ve plenty to do. I work in the mornings, using technology to communicate with Vicky, and then I do other things in the afternoons and evenings. Mostly arty craft stuff, with a little music-making thrown in for good measure.

Over the weekend, I was in touch with an old friend, June, from a previous job and she happened to mention that she goes for a walk every morning. It reminded me that I used to walk every morning, several years ago, but that I fell out of the habit. I remembered that I enjoyed it, kind of. I’m not a fan of walking generally, but I am a morning person and getting out when the day is fresh and I am fresh is a whole lot better than trying to motivate myself to go out in the evening, when I’m feeling a lot flatter.

So, this morning, at about 7.15, I left the house in shorts and trainers and walked about 4.5kms, part of it along the Dodder.

It was a beautiful morning, cold but not freezing; sunny, fresh, bright. There were spring flowers, …

… trees ending their long winter hibernation, and lots of people, walking, jogging, cycling. Everyone was very careful, giving others a wide berth, stepping out into the road, ducking into driveways and side roads to avoid proximity. All fair enough, but it was notable that this anxiety to avoid each other was accompanied by a reluctance to make eye contact or to make any attempt at social intercourse. Eyes were fixed firmly ahead or on the ground. Out of maybe 40 people I encountered this morning, only two showed any kind of social response. I know people are anxious and scared and it’s not clear quite how easily the virus is transmitted but, in the context of humanity being under siege from an invisible enemy, I found that a bit sad.

Speaking of flowers, I noticed these delicate ones on our coriander plant this morning. Aren’t they gorgeous?

I suppose my main achievement over the last week was completing my cutlery carving. I mean, phew! I started it in November 2018 and, for long periods, it’s been sitting in a box, lonely and ignored. I think I mentioned previously that I wasn’t quite sure what I wanted it to be: a trivet or an objet d’art. Sense settled the question. It’s lime wood which is a very light, soft wood and anything hot would char it very easily, so an objet d’art it is. It’s not in any way perfect but I like the way it turned out. 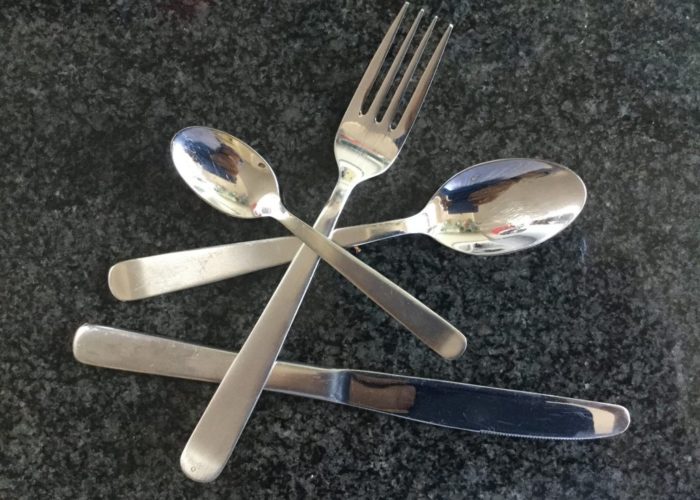 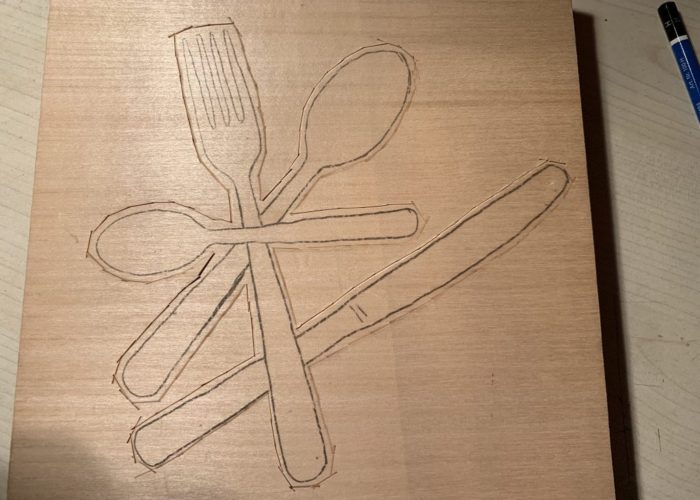 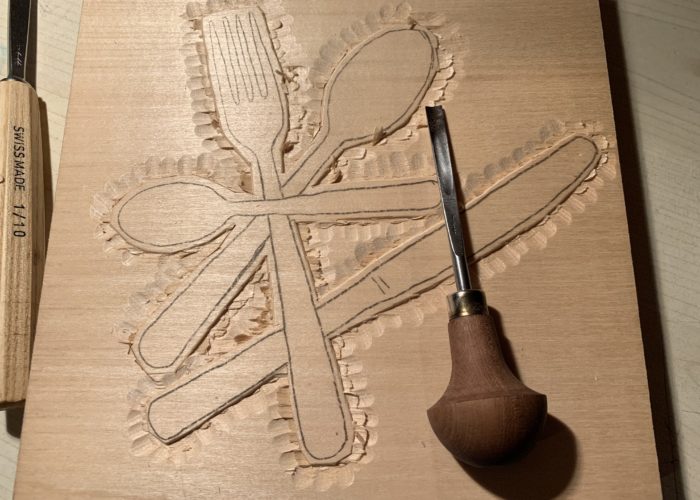 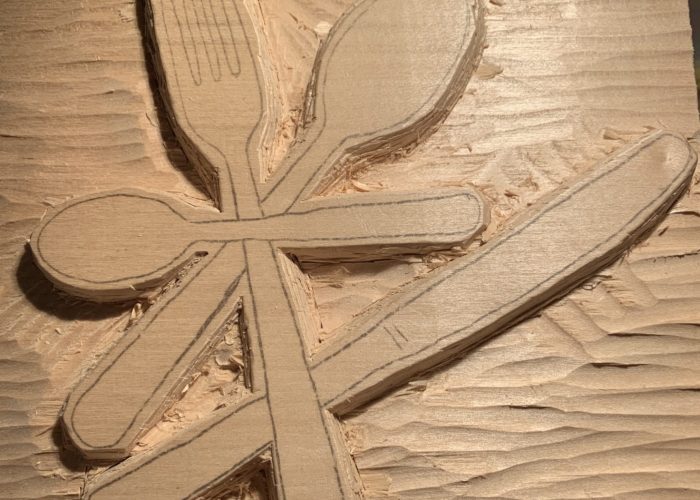 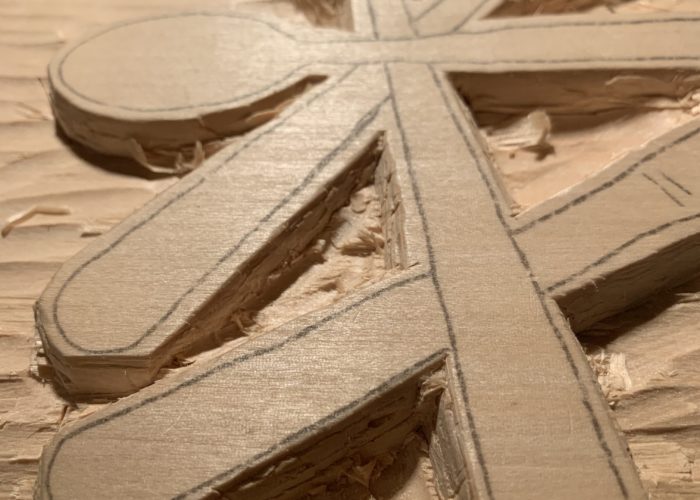 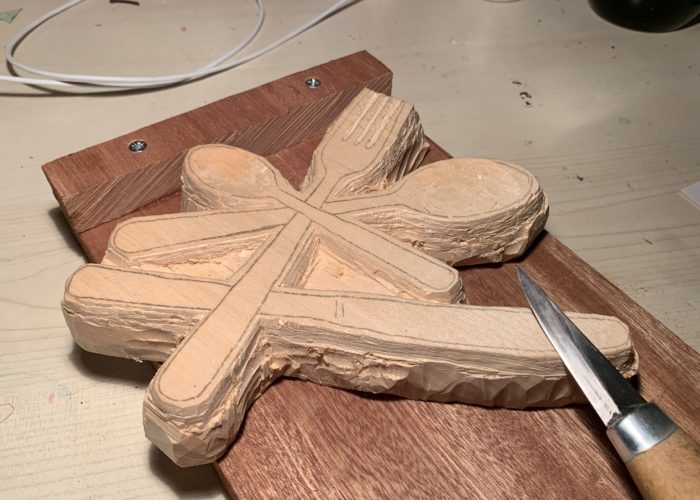 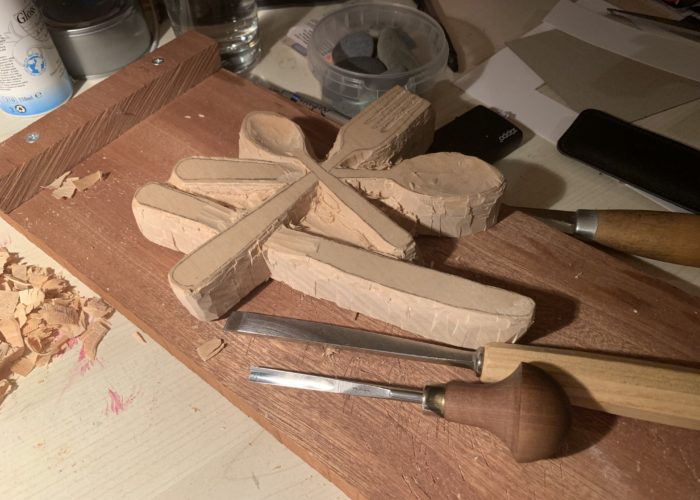 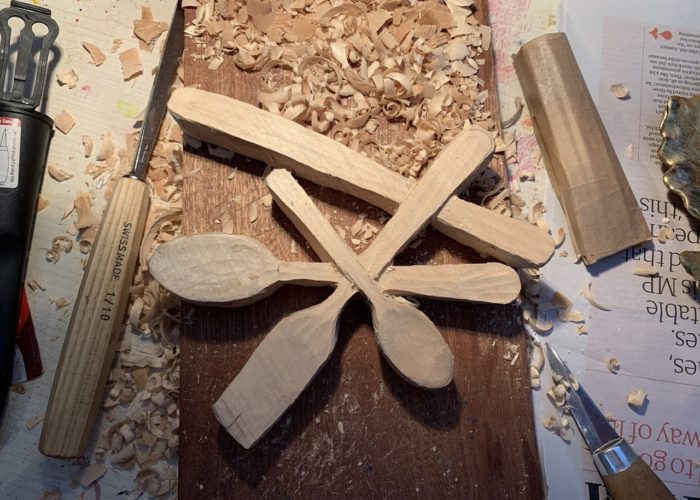 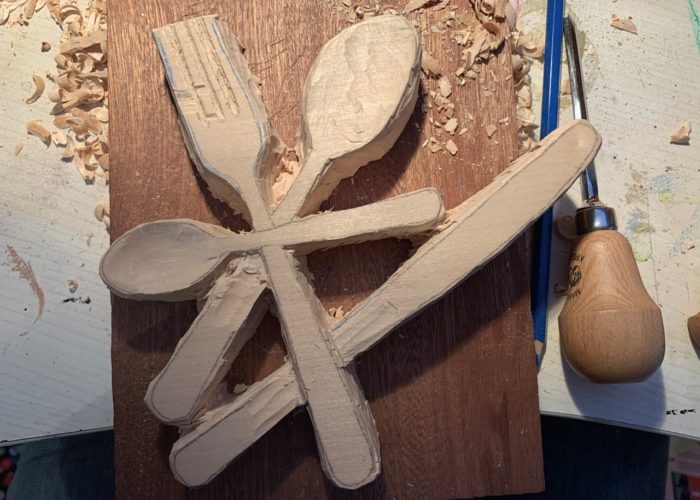 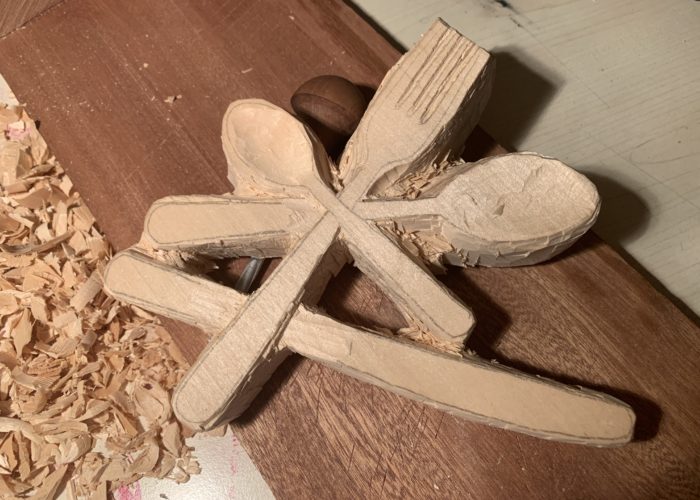 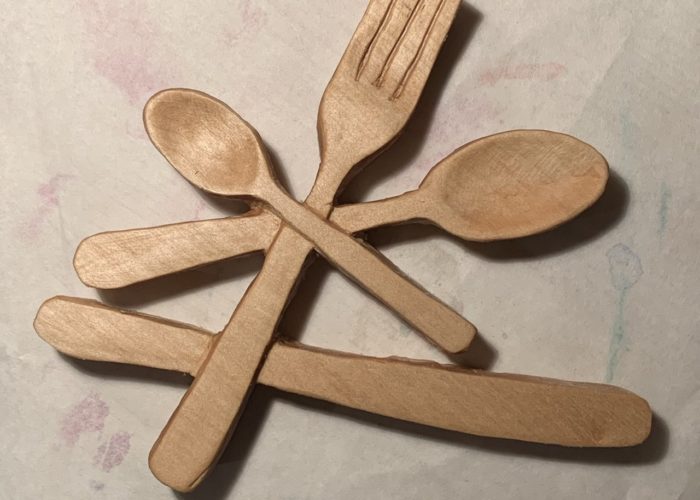 On the recommendation of another friend, I’m reading Robert Ballagh’s A Reluctant Memoir. I’m enjoying it. For all his republican socialism, it’s crammed with Protestants and aristocrats. But it gives an interesting insight into the workings of a creative mind and, although I wouldn’t claim to be an artist, I do recognise, in some of his descriptions, how objects, connections and context flow into each other to create ideas, and how one can feel a compulsion to work on an idea to make it real.

He quotes Rene Magritte, and the quote resonated with me and I did this with it …

Speaking of Magritte, Christine found some examples of how people, confined to their homes, had, for the sake of something to do, used available items to recreate famous paintings. And then she found a suitable painting. So, with the help of a sheet and under the art direction of the young lad, Edward, Les Amants by Rene Magritte was recreated in Rathfarnham Road.

There were a few other bits a pieces done but I think that’s enough for now.