First, a postscript to my last post. The labelling of my marmalade jars!

It’s been an odd week. I’ve struggled to stave off or at least not to succumb to a cold. I thought I had it under control on Wednesday but on Thursday, Friday and to a certain extent, today, I haven’t felt all that healthy. So my creative output has been a little limited and this is really just a summary of doodles and the like.

I’m keen on trying to create a tuna can candle that in some way represents street art. I’m a fan, not of mindless tagging, but of the true works of art that adorn various outdoor structures. Most of my stuff is on a very small scale and so I am in awe of the ability to construct very large artworks while working at close quarters with something as difficult to manipulate as a spray can. During the week I’ve been doodling really, just trying to work out the structure of letters, words and motifs. Here’s a small selection. 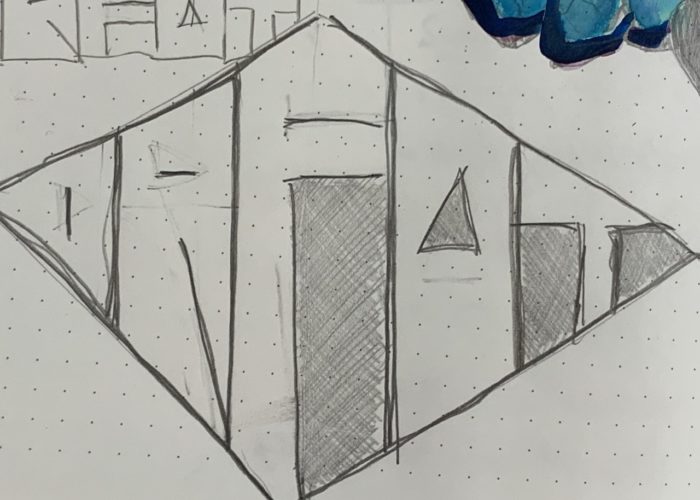 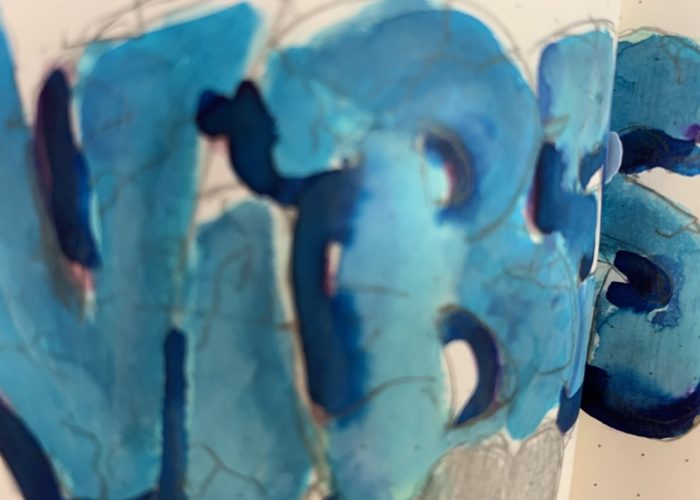 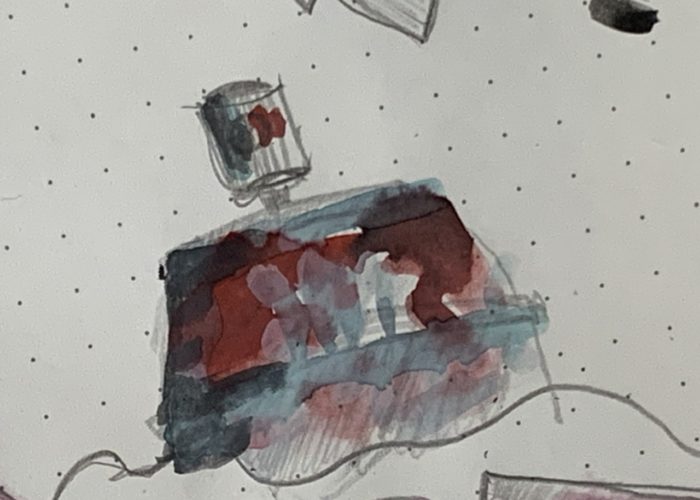 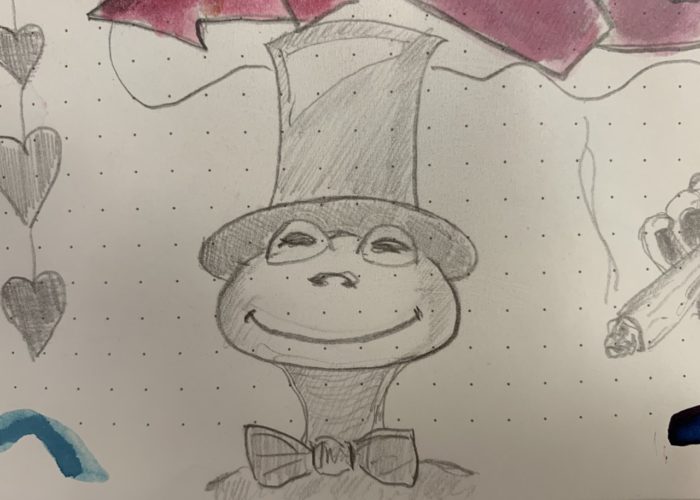 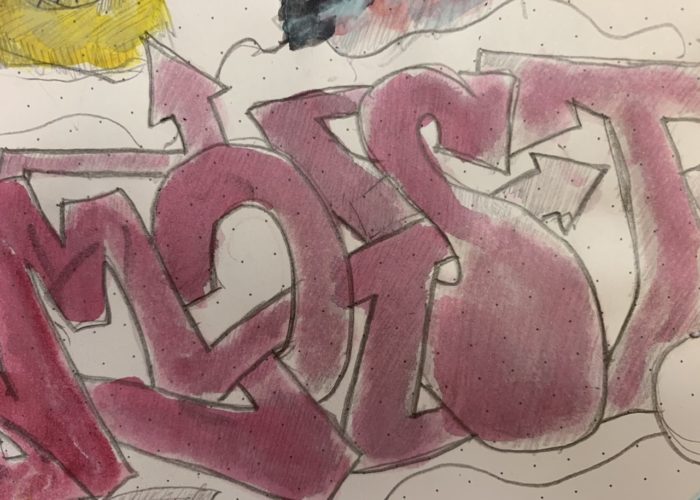 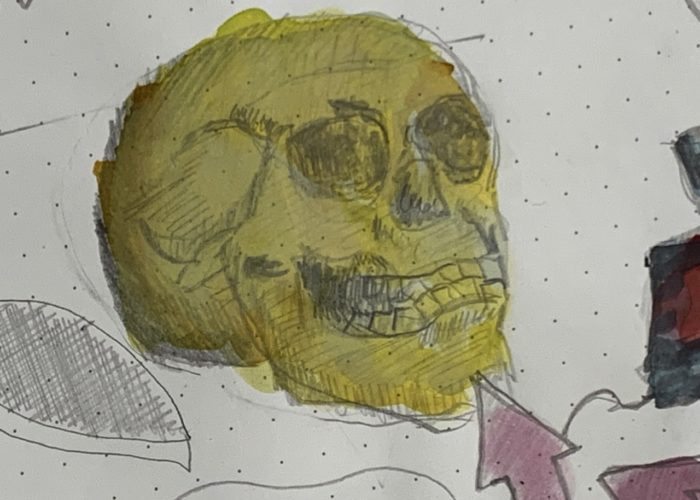 Regular readers will know of my minor fountain pen fetish. It’s harmless (really!) and the pens I buy are not expensive. Recently I took possession of another TWSBI pen and some Noodler’s Red-Black ink. This prompted a small crisis because it seemed as if I had about four inks of the same colour. To ease my pain, I set about trying to sort out and catalogue the inks Christine and I own. This isn’t a complete catalogue. Having completed the exercise, I discovered about five more calligraphic inks in Christine’s study, and the chart doesn’t include the four different blacks we have.

I bought the red-black ink because I thought it would be an appropriate colour with which to represent various Indian motifs on buff paper or envelopes. Like this.

I also did this with it.

And then I drew this

And carved this from an avocado stone.

Just after Christmas, I bought some art masking tape. Decorator’s tape is quite wide and the adhesive often takes the surface off the paper it’s attached to. I used the new stuff to try this.

Interestingly, the mask I made to create the striped affect looks quite good itself.

Recently I was looking at cyanotypes, a method of printing that results in a white image on a blue background and I thought I’d like to give it a go. As you do. So I ordered some photosensitive paper. Creating the image is a fascinating process. I had a grass stalk that Christine plucked for me in Bushy Park and I wanted to use it as the image. So, you take your object and place it on the blue photosensitive paper. The paper came with a piece of clear plastic and this is placed on top of the object and the paper. You leave it or hold it in direct sunlight for 5 – 10 minutes until the blue paper fades. At this stage the image appears as a dark shape on a light background. You then rinse the image in cold water for about a minute whereupon the colours are reversed with the image becoming white and the background blue. Then you dry the paper flat. As the day progressed, without any further intervention on my part, the blue became darker and the contrast more striking. The slides show the process completed this morning and the picture below, the image this evening. 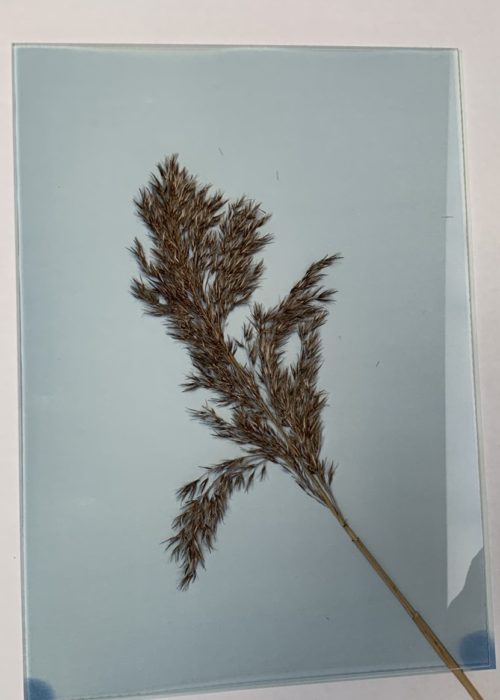 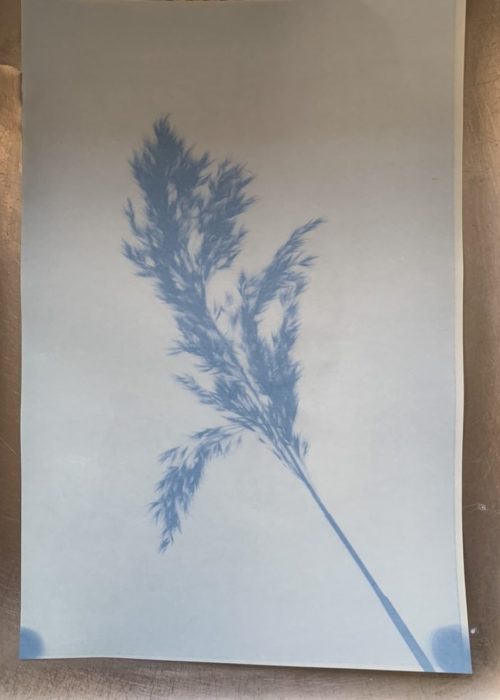 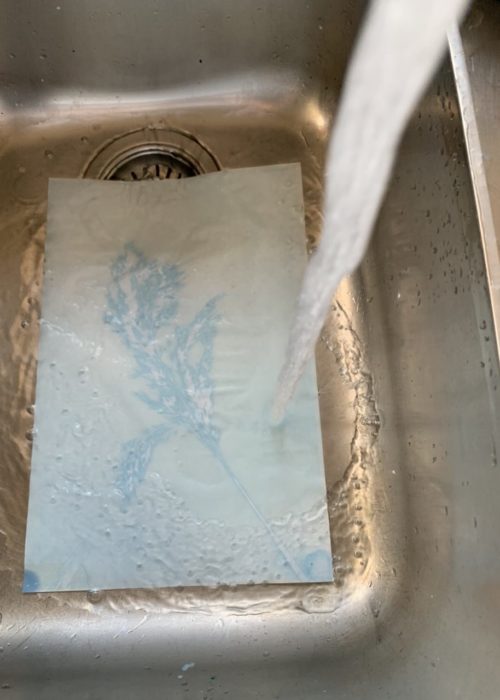 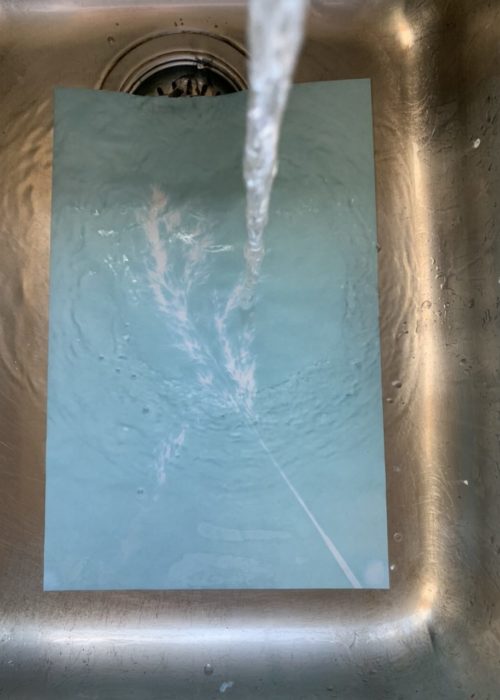 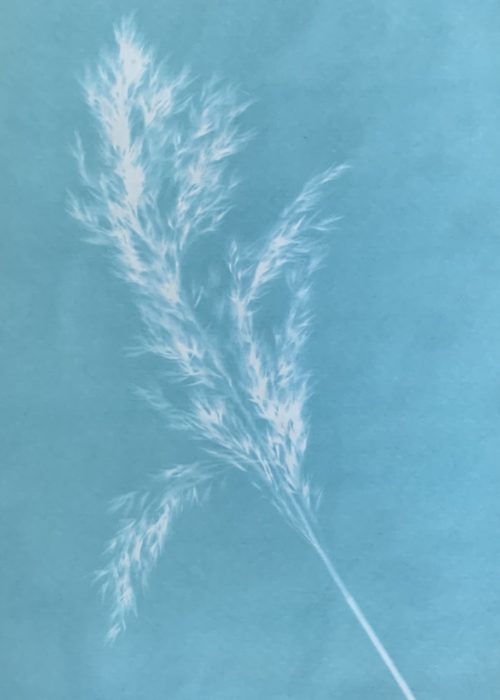 Finally, a linguistic curiosity. In Finnish, there is a word that means sitting at home in your underwear, getting drunk. It’s kalsarikännit.