Christine, her sister Tracey, my niece Helen and I went to Birr Castle recently to have a nose around. To cut a long story short, near the end of a walk around the grounds, We came across this 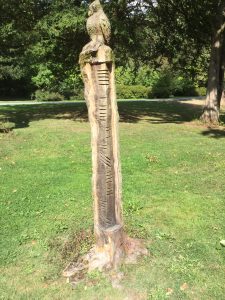 It attracted me because it was carved out of a tree trunk but then I saw the Ogham and thought that Ogham might lend itself to both linocuts and, obviously, wood carving.

I mulled over this a bit and then had a look at Pinterest to see what I could find Ogham-wise. Lots, actually. So I selected a couple of designs , carved them out and started working on some print ideas. 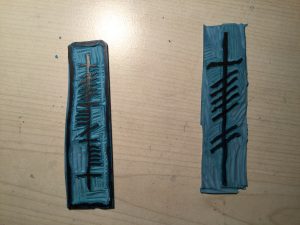 Historically, Ogham appears on stone so I tried to create a background that might suggest stone, and came up with a messy grey wash. 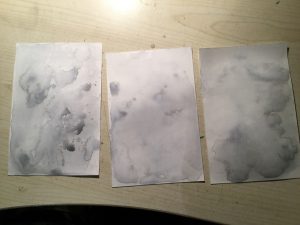 I had recently bought some white printing ink, so I thought I’d print some in white on black card. Here’s the print results 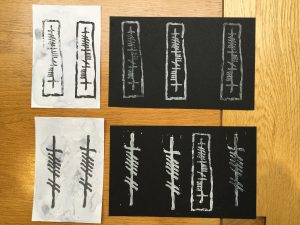 A bit of a mixed bag. I selected some of the clearer ones and the ones that I felt had a bit of atmosphere about them, cut them out and reinforced them with another piece of card. Voila! 6 bookmarks (or whatever). They look better in real life. The photos don’t really do them justice. 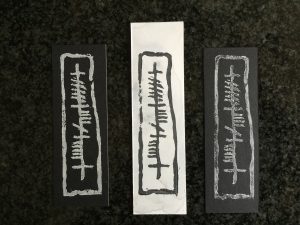 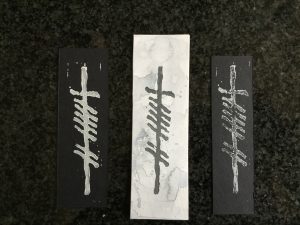 Spot the schoolboy error which I didn’t notice until I was comparing the prints with the originals to see which way up they should be. Yep. I forgot that, when printing, everything appears in mirror image. In other words, I should have carved them backwards.  So, they are, as they say, meaningless.